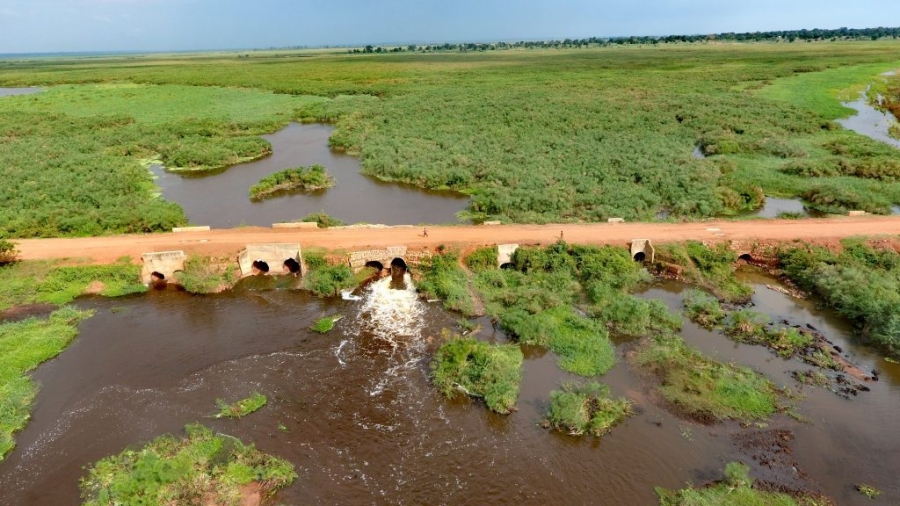 Concerns have been raised over the damaged Saaka Swamp Crossing that connects the Districts of Kaliro and Pallisa. The crossing was damaged and made impassable by the recent floods that the country experienced over the last few months. Unfortunately, some lives were lost when a vehicle fell into the swamp waters on 22 February 2020.

The heavy rains that the country experienced last year seriously affected and caused damage on this 3.6 km swamp crossing. These rains were quite unprecedented and are as a result of climate change, which is now a worldwide phenomenon.
It is worth noting that this swamp lies downstream of the Tirinyi Swamp on the Nakalama-Tirinyi-Mbale Highway; a swamp that is crossed by the River Mpologoma, whose catchment area includes the Mt. Elgon area.
The damage to the swamp crossing was not only caused by the heavy flood waters but was aggravated by the many papyrus suds that were carried by the torrents of flood waters. These covered and blocked the culverts causing the water levels to raise and subsequently overtop the road embankment across the swamp. The fast-flowing waters then rapidly washed out the gravel material and subsequently washed away the culverts particularly at the locations where the Mpologoma waters traverse the swamp.
Saaka swamp crossing was constructed by the Ministry of Works and Transport largely using the Force Account Modality.
The swamp crossing was opened to traffic about 2 years ago. Despite having commenced in 2011, these swamp crossing works experienced delays mainly due to budget constraints.
In view of the above, the Ministry is planning for interventions to restore connectivity as soon as water levels reduce. It is anticipated to undertake short term interventions as plans are made for more permanent ones, due to the high costs associated with the latter as provision has to be made for enhanced hydraulic capacity to accommodate the high flood waters, while at the same time ensuring that the bridge or drainage structure has sufficient strength to withstand the hydraulic pressure exerted by the fast moving waters of River Mpologoma. A span bridge and some box culverts are envisaged and the costs for these are high, so an appropriate budget will be required.
During the time that heavy rains were being experienced, the Ministry advised the Road Administrations to ensure that the public was made aware of any disruptions and also carry out emergency interventions at critical locations, where road infrastructure was damaged.
In the case of Saaka swamp the Districts of Kaliro and Pallisa were duly informed. As restitution was not possible at the time, the public was informed that the swamp was impassable. Notices were placed before the swamp to this effect; as well as some stone boulders had been placed across the road.
Unfortunately, on 22 February 2020, a driver ignored advice from the local community not to proceed along this road and even circumvented the stone boulders that had been placed across the road and very regrettably ended up falling into the waters.
To avoid the repeat of such disastrous incidents, murram stacks were immediately dumped across the road on both approaches, so that a vehicle cannot at all be able to proceed to the damaged section of the swamp crossing.

The Ministry is having a challenge with restoring connectivity over many crossings that suffered damage due to the recent heavy rains. The Ministry has compiled submissions made by the various Road Administrations and come up with the cost estimates; which have been submitted to higher authorities. Unfortunately, to date no funds have been allocated towards addressing these failures on the road infrastructure due to budget constraints.
As far as Saaka swamp crossing is concerned, its intervention is being prioritised by the Ministry as soon as water levels go down and funds are secured.
The loss of lives however, is very regrettable and all District Local Governments are urged to erect barriers and also continuously monitor their road networks where the road infrastructure has been damaged rendering them impassable/too dangerous to traverse.