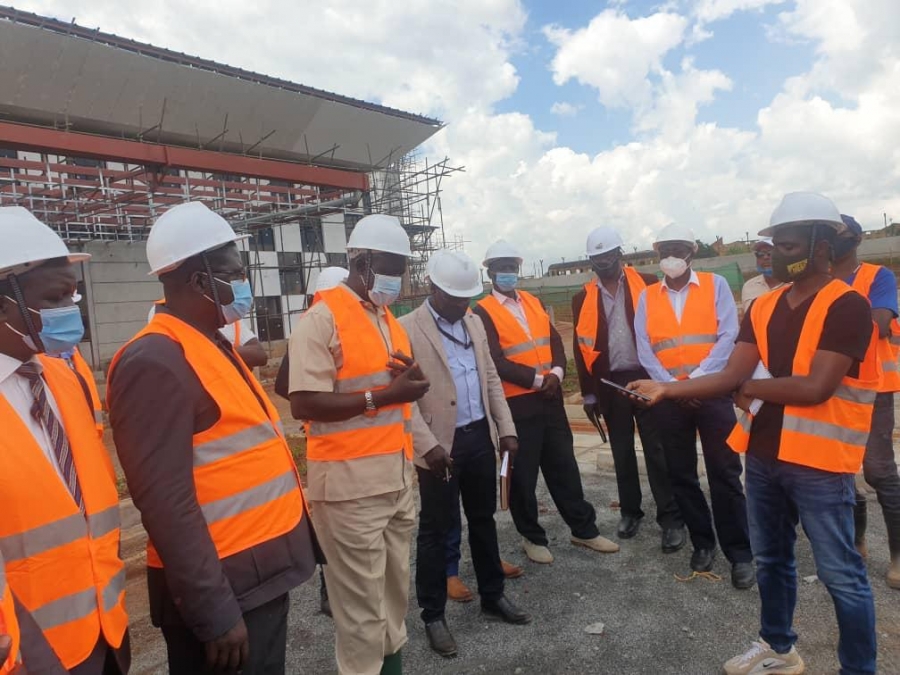 The Hon. Minister of State for Works Musa Ecweru on Friday 10th September inspected the ongoing works at the Gulu Logistics Hub. He noted that the construction and completion of the hub is timely as will coincide with the rehabilitation of the Tororo –Gulu meter gauge railway line.

The minister and his technical team were received by the District leadership including the District Chairperson, the resident City Commissioner, the City Mayor and the Mayor of the Town Council.

While at the hub he revealed that the contract for the construction of the access road to the hub had been awarded and works are awaiting compensation of the project affected persons.

The hub is designed as a dry port with both rail and truck terminals containing warehouses, container terminals and general lifting equipment. The facility will offer handling and storage services, space for stakeholders dealing with freight transport; freight forwarders, shippers and transport operators and accompanying services such as customs inspections, tax payment, maintenance and repair, banking and information communication technology.

The land chosen for the project is adjacent to the current Gulu Railway Station. Several studies have shown that the city (Gulu) is served by international trunk roads linking Mombasa, Kampala, and Juba and it is also crossed by the international one-meter gauge railway.  The town has the largest airfield after Entebbe hence it offers bulk storage for goods and serves as a waiting point for cargo trucks.

While inspecting the site, the Minister noted that the hub holds great prospects for the region..

“The Gulu Logistics hub upon completion it is expected to facilitate logistic movement in Uganda through the Northern Region by reducing transport costs, improving efficiency in the movement of goods and serving South Sudan as well as DR Congo,” he noted.

It is also projected that the facility will create many jobs in maintenance, assembly, machinery repair, dry docking, packaging, labeling, and administrative work.

The farming sector in Gulu which produces plenty of grains such as groundnuts, maize, simsim, and rice will also benefit from the hub. There will be a warehouse to receive and store the grains, workers in the value chain of the logistics hub and large players in the logistics industry to serve the sector. The project will be commissioned in June 2022 and its operation will be tendered to the private sector, who will run it as a concession.